The journey of the company now known as Kiesow, Inc. began 45 years ago under the entrepreneurship of Floyd Kiesow who still owns and operates the company today. 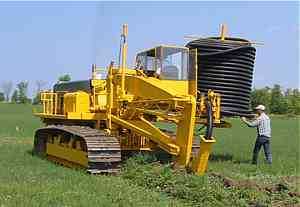 With drive, determination, and an enterprising spirit he purchased his first backhoe in 1969 and began digging basements as Kiesow Excavating. Work was steady, but neighbors and acquaintances were increasingly contacting Floyd for consultation on how he could use his talents to increase productivity of their farmland.

As demand increased, Floyd decided to follow the recommendation of a friend. He contacted the local Soil Conservation Services Office for advice and information regarding the potential for long-term success of a farm drainage venture.

Their response was overwhelmingly positive. Floyd purchased his first tiling machine and changed the name of the company to Kiesow Farm Drainage in 1970. As business continued to grow throughout the 70's, the company took on it's current name - Kiesow, Inc.

Under Floyd's management and guided by his integrity, the company remained strong and solid during a period in which many others attempted to gain foot-hold in the industry and struggled to survive. In 1990 his son, Brian, joined the business and added to the company's success.

Still warmly recognized and identified by customers as Kiesow Farm Drainage, today Kiesow, Inc. is one of the top farm drainage competitors in the state.